The Life Aquatic by Cameron Morse

New baby and no function in my left hand
means I may not hold her. No wonder
The Life Aquatic makes me cry in my laundry
basket and I write down, “Infra 5 Orchestra
Version,” in a red marker. Paint swatches—
“seaside villa, sunbaked brick, incredible
white …”—a deck of cards arrayed before me:
“Pick a card, pick any card.” I should have
been killed as an undergrad in Grand Rapids,
crossing some black parking lot. How many
times had I walked to Celebration Cinema
to sit alone in an empty theater and weep
during The Darjeeling Limited? Samples
of paint bloom on the dark wall of my bedroom.
~*~ 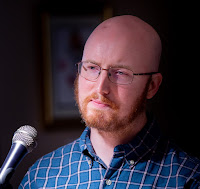 Biography:  Cameron Morse (he, him) is Senior Reviews editor at Harbor Review and the author of eight collections of poetry. His first collection, Fall Risk, won Glass Lyre Press’s 2018 Best Book Award. His book of unrhymed sonnets, Sonnetizer, is forthcoming from Kelsay Books. He holds an MFA from the University of Kansas City-Missouri and lives in Independence, Missouri, with his wife Lili and three children. For more information, check out his Facebook page or website.
Posted by J. R. Jackson at 3:00 AM No comments:

John Sinclair and The Chair by Su Zi 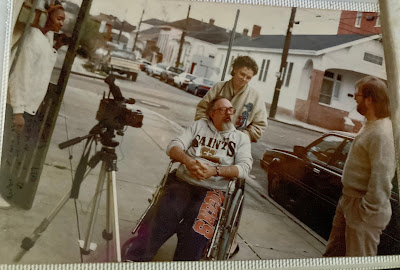 John Sinclair is a cultural icon. An author of so many books he has “no idea” how many, saying “why would I count them?”; a sonorous baritone of the radio waves, including formerly on WWOZ New Orleans, and now via streaming on Radio Free Amsterdam; John Sinclair has presence. In fact, one rainy night in New Orleans, there was a show at Snug Harbor featuring John Cleary on keyboard with Michael Ward on congas; after the opening piece was performed, the theater doors opened and in walked John Sinclair: he walked with a cane then, wore a beret against the rain: everyone stopped, turned, Cleary and Ward brightened considerably from the stage—John commanded the room, and everyone waited for him to be seated.

Back in 1991, Sinclair spent six months in a wheelchair when “I tore the tendons in both knees” (personal interview, 2022). Of that time, he says “I was crippled. Painful. It was a drag. I never had anything like that before. It was a new experience. It was terrible.” At that time, Sinclair lived in a rental in the upper Marigny, which had doors at street level. Still, to go out, he says it took “a lot of nerve. It was mental, it was challenging. When you can’t control your leg, it's challenging, you know”. At that time, there was unofficial assistance “oh yeah, I had helpers” by family members Penny, and daughter Celia. There might have been a van. Anyone who visited Sinclair then would find themselves in the front room, which shared two walls with the street and was lined inside with wooden crates filled with records albums. There was always music. After he got past the point where he needed to keep his leg extended horizontally, the wheelchair became occasionally just a chair to sit in for guests, as John pulled albums for his radio show.

Thirty-one years later, John Sinclair is still broadcasting the blues. Although he currently finds mobility with a walker, he has again done time in the chair.

Of that time again in the chair, Sinclair says: “ooo hoo hoo”.

Back when, in Chicago or New Orleans, John Sinclair stood large—tall and wide across the shoulders. He would have been seen smoking outside some pishposh auditorium before a reading by Gwendolyn Brooks, he would be seen strolling the Irish Channel during the street party that second-lined the St Patrick’s parade, he would be seen taking up an entire comfy chair in Bob Rudnick’s Chicago apartment: John Sinclair was seen out.

Now, John says, “I just go to the doctor.” His assistance consists of “a live-in caregiver, one of my daughters come everyday—cook, clean up, it’s a beautiful thing”. He has a porch.

But John Sinclair no longer goes out: “I don’t go anywhere…too much work. I gotta go up and down 22 stairs, so I don’t go anywhere if I don’t have to.” He prefers the walker, because he says, “I have no balance, so when I walk, I am terrified that I am going to fall.” Unfortunately, also, “One time, the walker collapsed…fell on the sidewalk…broke my shoulder in three places.” Yet, there’s still recent releases of books, his voice can be heard by a few touches from a media device, and the laziest research will have him among cohorts like Abbie Hoffman and Marshall McLuhan. Sometimes, the TV will broadcast a John Lennon documentary, and suddenly there’s the voice of John Sinclair—of which, Sinclair himself says, “oh, yeah, that’ll always be there”.

As we go through our lives, we might become aware of decisions about how we want to live; in this regard, we have The Blues—a lifestyle choice that acknowledges both deep sorrow and spiritual uplift, and can perhaps be most easily seen by a No-Longer-Young Mick Jagger rising from a COVID-positive to performance dancing in a fortnight’s time. The Blues is more than a style of music, it’s a way of life; a way of life that encompasses a career of recordings, publications, broadcasts, appearances, public support, activism…and now, Disability, which is, in Sinclair’s words “no bed of roses”.

You labored hard to get where you are
struggled,
studied,
networked,
did the work,
you earned it.

You ignore others who labored just as hard
struggled,
studied,
networked,
did the work,
got nowhere.

Because systemic racism, misogyny,
heteronormativity,
neurotypicality, and racism
deprived them of
the same opportunities
you took for granted.

Because authoritarian governments
deny them education,
jobs, housing,
civil rights,
health care,
equality.
Not all those who
struggled,
studied,
networked,
did the work,
reaped the rewards.
If you never had
to wait for a court
to decide if you've
the same rights (or not)
as everyone else,
you have privilege.
~*~
Biography:  F.I. Goldhaber's words capture people, places, and politics with a photographer's eye and a poet's soul. As a reporter, editor, business writer, and marketing communications consultant, they produced news stories, feature articles, editorial columns, and reviews for newspapers, corporations, governments, and non-profits in five states. Now paper, plastic, electronic, and audio magazines, books, newspapers, calendars, broadsides, and street signs display their poetry, fiction, and essays. Left Fork press will publish What Color is Your Privilege?—a collection of political statements in poetic form—this September. http://www.goldhaber.net/
Click anywhere on this sentence to learn more about their collection or to preorder it!
Posted by J. R. Jackson at 3:00 AM No comments: