This poem was inspired by the TV show Avatar: The Last Airbender, which I loved when I was younger, but as an adult began to bond with in a completely different way. This past June, as I was preparing something to read for an open mic event at my graduate program, the theme song began to play in my head: "Water, Earth, Fire, Air".

I had been planning to read a different poem for this event, but began to wonder how these elements would sound in the form of a spoken word piece. More importantly, I wondered how I could make them relevant to the themes that I already loved to write. As someone who also writes creative nonfiction, trauma, mental illness, and especially neurodivergence are important topics for me as I believe that everyone deserves to feel safe discussing them openly.

I began to think of every emotion that I personally experience and compare them to the elements: water as grief, earth as stubbornness, fire as rage, and air as fear. When I had this list running through my head, I realized how much of these emotions come from trauma. I then remembered the four trauma responses: fight, flight, freeze, and fawn. For the next few days, the poem began to form in my head, and play on repeat until I had no choice but to get it out on paper. This ended up being the poem that I would read for the performance, and the reactions to my reading would make me realize that this was the correct decision.

Biography: Cassidy is an autistic and ADHD writer whose genres include creative nonfiction, fiction, and poetry; but her most notable work is in the performance art of spoken word. A native of Swoyersville, Pennsylvania, Cassidy will soon earn her Master of Arts in Creative Nonfiction from Wilkes University; where she had also earned her Bachelor of Science in Earth and Environmental Science and a minor in Spanish. She can be found working on her debut essay collection, taking care of her abundance of houseplants, or training in mixed martial arts at her neighborhood dojo.

CFS crumples you into a ball,
Ready to be thrown away.
But look hard enough
And all those same things
That are written on you, into you
Make up the very essence of you,
Are still in there,
Somewhere.
The things that make you tick,
What makes you laugh,
The moments that make you tingle,
The things you care about,
What matters.
It matters,
You matter.
Those creases and lines
That the illness brings
Are not part of you,
Not really,
They are only the surface,
Not your soul.
~*~ 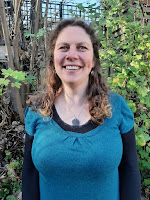 Biography: Charlotte Bray lives in the UK with her family and 2 rabbits. She has CFS/ME and uses writing as a way to express the challenges of living with this condition. By sharing her writing, she hopes that it will spread understanding and resonate with others who may be living with a chronic illness/disability. She loves audiobooks, trees, herbal tea and her dressing gown! This is her first published piece of work.
Instagram: charlotte.restmakesmestronger
Facebook: charlotte.restmakesmestronger
Posted by J. R. Jackson at 2:00 AM No comments: