Go Figure: A Meditation on Illness and Understanding by Dov Zeller

I.
Latin figurare "to form, shape.”

The inscrutable shape of a story unfolds here.

Not a story, a catalogue of thoughts. A scrolling form.

The beautiful chaos of musings. Another misshapen day.

What will I do with these flocks? Seconds that make up minutes—sunlight glinting on their wings, where comes together so many feathery hours.

Hours like a pod of whales that swims in formation (fully aware that the toxic waters won’t hold them much longer). And what do they do? Do they nod a little goodbye to the world? Sink to the sand below and be done with it? No!

They love and mourn. Swim in community and flex their muscles. Fly up into the air and make art. They are activists, and they play, because they know these hours are all we have.

(Hours that make up days.)

Do days cut a poor figure? Are they to be held and trusted, or let go? Followed quietly? Flushed with everything else into the oceans of time that so long ago held and worried and groomed us until we walked or crawled or shimmied out, sunbathing on the banks.

All days have shape. Just different. Differently-shaped days. My days won’t fit. They won’t rest on the kitchen table or sit idly on the palm of my hand. The briefcase can’t close over them. Like water they spill over and through and soon, there comes another.

And there you have it, a week. Seven days, an odd, prime number. In a month there are four of them, and usually a few extra days thrown in for good measure. Like a pinch of salt. The flour left on the cutting board after the dough is rolled. (There is (dis)order in (dis)order.)

As for me? A bit crumpled lying here in my bed. The sheets in a tangle. Someone somewhere will say, “He cuts a poor figure.” Don’t worry. We’ll figure it out. We always do. (Time and I until time goes on without me.)

II.
I’ve heard some say “I don’t have a musical bone in my body.” Others that they don’t “have a head for figures.”

But the truth is, music is simply part of the landscape. Within and without. Birds sing almost everywhere. Crickets salt the night. Wolves go on and howl. Fish swim and dart in great symphonies, bless their shoals. The sun rises and sets, the moon in its cyclical shadow. Tides go in and out. Our hearts beat at a rhythm and our blood hums along and so there is at least one music to be escaped at great peril. (Use the musical sign for rest.)

As for figures, those of us who see a line, a circle, one or two disconnected strokes, begin to find a body forming there. Our brains are trained to connect. To see faces—the Virgin Mary in a piece of toast. An electrical socket, two eyes and a nose (or is it a mouth?)

Pareidolia is the word for people who see faces to excess in inanimate matter. But it’s all a matter of degree. To see identifying characteristics everywhere. To form a face, a body, a story.

We nearly all have a head for figures to a point.

And then there are connections that go beyond the immediate. Yesterday x talked of a friend. “They’re brilliant,” x said. “They read a lot and watch a lot of films and make adventurous connections.”

Some people are imprisoned by false connections, marinate in them until all they can do is force dots and lines together from two different universes to insist on a truth that isn’t there.

I am trying to have compassion. Trying to understand. The universe is bigger than a bread box, and yet, someone somewhere might hold a whole universe in their hand.

III.
Definition. Figure. The “visible and tangible form of anything.”

Etymologically, the word comes from the formation of numbers. Lines building themselves into symbols. From there the word goes more broadly figurative. And then, more literally figurative? Lines forming a self. A body. (Here the line between literal and figurative begins to swerve.)

Realistic figures. Abstract figures. Classical figures. Figures in shadows. Figures in light. Hidden figures. (Is there space for realism when all is processed through the work of memory? Perhaps we live largely in fable, in rigorous dreams.)

To create a figure, you may first need a line. (I’m casting it. Hold on. I’ll reel you in. But what if the line is dotted?)

So often I’ve heard reverence declared for an artist’s curved or voluptuous, continuous or disconnected lines. When I try to form a line, it staggers, drunken, across the page. It jitters and shivers and refuses to listen to the idea that brought me to it.

I look at abstract art and even when I admire the lines, I don’t know how to speak of them.

“Which paintings have sharp lines, and which are soft, smooth or rough? Do the lines in the composition draw your eye to a specific part of the painting? Do some lines contribute to the feeling of action or stillness in the painting? Does […] always use the same style of linework, or does [their] style vary?” (“Five Ways to Think About A Line” click here to read.)

I look at my abstract life, and wonder, where is the specificity here? Where are the days? They’re all a mash. Vegetables boiled until the flavor’s gone out and you don’t even need a mill to turn them to soup.

And yet the next one comes folded and new. Fresh as cut grass. Sharp as a wound. Vivid and full of wonders because we live on a great marble that spins around a moving ball of fire. Interminable explosions freckle the sky as far as the eye can see. How can I not feel awe?

(When theories of light were young, philosophers thought the eyes reached out to grab at light, rather than being open and sensitive to the light that travels toward us.)

I’m so sensitive to light, I lie in the dark for most of my waking hours. I’m light averse, but most stars are far enough away that they don’t hurt. I’ve hurt people I love and all I can do is try to accept, to acknowledge, try to let go and do better as new days travel toward me.

Sometimes the past feels as far away as the unheated light of distant cosmic objects. Other days, time feels so airless, each day of my life a transparency set atop the next until light can’t get through and everything is inscrutable, but the pain of the past is as young as it ever was.

Still, I am trying to figure out what it means to be a figure in bed. A still life while still living. Not portraiture. Neither captured on canvas like fruit or a vase of flowers. No “Starry Night” (Van Gogh) or (Soutine) “Landscape in Ceret” (still lifes in motion). Just lying here unable to feel the constant motion, the Earth barrels along at nearly twenty miles per second and I sit here in the dark (what kind of figure am I?) listening to the rain.
~*~ 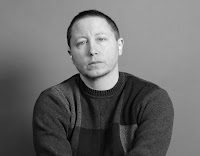 Biography:  Before getting full-blown CFS/ME, Dov Zeller struggled to sit still and often read while walking (in between swimming, biking, and yoga). Now he is an intrepid recliner. Though sick with a devastating chronic illness, he is determined to appreciate the ecosystems he comes into contact with. As it turns out, even a small world is full of endless complexity. He enjoys reading, writing, visiting with friends, listening to audiobooks and classical guitar, and observing birds who drop by the window feeder. Zeller lives in Western Massachusetts, where he moved in order to complete an MFA in fiction at UMass Amherst. He has also lived in San Francisco and Oakland, California, and Brooklyn, NY, and he grew up in eastern Pennsylvania. He has two novels coming out this year.