A Conversation with Author, Joel Champion 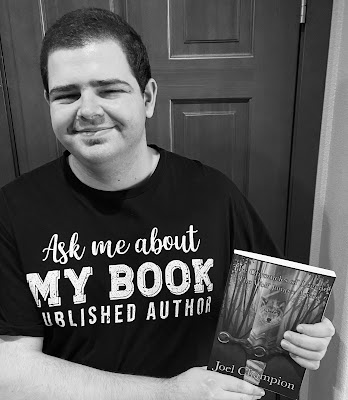 The journey begins in the wondrous and ancient land of Mythokor as an evil force, known as the Shroud, scours the realm to rebuild an ancient weapon of power. However, can an unlikely hero from humble beginnings defeat the diabolical Shroud and save his home? The adventures of kings, heroes, villains, knaves, a mysterious princess and the Wolf Jumper begin here!

Intrigued? Yeah, I was too. So much so I had a little Q&A with Joel Champion, Author of "The Chronicles of Legend: The Wolf Jumper Arises".
Handy Uncapped Pen: What inspired the idea for the book?
Joel Champion: I think a lot of what I consume inspired me to write, particularly this story, but I’ve had this idea of the land of Mythokor and the Wolf Jumper narrative in my head since 2016 (I think). The development process was super long, but the writing and publishing process took around three years. But a lot of different things inspired me: like the idea of building and creating my own world to write and “play in” rather than writing for other franchises and their stories. I believe being independent gave me great freedom to be flexible with characters, history, names, and the narrative itself. Sometimes, I would listen to music and soundtracks that would put images of epic battles of sword and sorcery in my imagination, and I hoped to create a story that would inspire others as well as myself when reading because I believe it’s important for me to write and create independently since most stories nowadays aren’t what I prefer.
HUP: Is there anything you would have done differently during the publication process?
JC: Honestly I would’ve hoped to get a hybrid publisher or wish I could’ve had a bigger platform before publishing, and wish I could’ve tested certain things like getting a cover artist and editor before actually hiring them, for the process was long and took me nearly six months to complete! I also would’ve found an authoring coach and gotten the inside scoop on who to publish with before publishing on Amazon with KDP. It was really hard to do research on such a niche idea and process like self-publishing. I also would’ve done a lot of things differently, like making the book longer and testing its length with others.
HUP: Will there be a sequel, or what projects are you working on now?
JC: Regardless of the success of the first book in my “Chronicles of Legend” line, I want to revise and expand the first book to make it longer (more in depth) and fix certain things I found and believe need fixing, such as missing dialogue and added details. I’m currently writing the revisions and want to publish that very soon, hopefully this year, but maybe using a different platform or publisher! But I’m also working on more than ten different types of books I want to write throughout my life, jumping from narrative to narrative, keeping my writing and imagination fresh! Such as a sci-fi book, a superhero team book, a detective story, and a comedic trek story—I got a lot of plans to publish someday, one book at time for me! So long story short: yes, I hope to do a worthy sequel!
HUP: Are there any narratives in your book that discuss Disability?
JC: There isn’t really a mention of disabilities in my current book, but I’m planning on writing a book with autism and other disabilities being the focus on certain characters! And I guess I kinda based the Chronicles of Legend main character: Zyte, on myself a little but much braver and courageous like I want to be; the main love interest for him: Princess Shadus of the Dragon Nation of Vanlatha, was born human (spoilers) instead of being a dragon due to a rare magical genetic/subspecies within her family line, which I thought was very interesting!
HUP: As a Disabled Author, what is your perspective on Disability representation in literature?
JC: I haven’t really seen a lot of good representation of autistic people in literature, let alone pop culture like games and movies. They (games and movies) depict certain characters with disabilities as the bad guys and are being exploited, which I find very offensive to my kind of people and to myself. But I plan to change that with my own stories and bring a new perspective to the world, showing that we (as people with disabilities) have a voice too, which I take pride in. I’m blessed enough to speak out against the contemptuous people badmouthing disabled people and change the world with my life and stories.
Visit joelchampion.com to order your copy of “The Chronicles of Legend: The Wolf Jumper Arises”.
Posted by J. R. Jackson at 3:30 AM