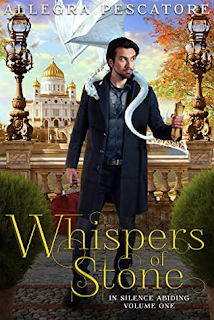 Note: I received a copy of this book in order to review it.
There will be brief mentions of rape (a slight spoiler), racism, and ableism.

Picking up directly after Where Shadows Lie, our protagonists find themselves in various states of danger. Elenor's father is dead, and she is accused of his murder; it doesn't help that her mother is missing and her scheming aunt has arrived in the kingdom. Gabriel has aligned himself with Elenor while trying to control his unlocked magical potential. Fedrik has an ability that just might doom the world... even with Fayrian's help. Daemon keeps ticking off the wrong beings. And a golden god seeks vengeance for the death of another.

I loved the first book, so I was a bit skeptical going into this one as sequels can often disappoint. There are more books to the universe than I thought, and I only found out about them in this book. The book is split in two due to length (the next book arrives this summer). Despite my concerns going in, they proved unfounded. The series is in a universe with other books (but can stand alone). While much is left unresolved in this book, it doesn't leave me feeling like I'm on a ledge waiting for rescue.

The characters feel genuine. Elenor anguishes over her past decisions and deals with the impact of an illness flare (which can affect her ability to make decisions). Fedrik is lost and dealing with the fury his new Gift gives him. Fayrian is still a smartass, but she also has a small sense of hope underneath. There are a lot of tough emotions in this novel but also tiny sparks of strength and joy.

There are a few minor characters with various disabilities. Phoebi is a grandmother with cerebral palsy. Mari is an amputee who had her hands cut off for being part of the rebellion. Suela has no eyes. I'd say Alehan has PTSD, but it isn't confirmed.

Schemes and plans are amped up in this installment. Elenor must find a way to get out of her aunt's terrible trap. Each god has plans (and pawns) that continue to move forward. I could feel the clock ticking, and I'm excited to see what the author does going forward because there are a lot of threads to tie together.

The world still feels like a real place. Readers are given more details on the complex (and somewhat unique) magic system. Places come alive with just the right amount of detail. The lore is evolving with each book. Supplemental materials (including a recap of the first book) exist in the back of the novel to assist readers with remembering characters and events.

Ableism and racism are vaguely present in this world. I counted one instance of each.

Spoilers: At one point in the book, Elenor has sex with someone she doesn't want due to blackmail. I consider this a type of rape, though the person she beds isn't the one blackmailing her. She is given a tea to make sure an unwanted pregnancy doesn't occur.

There was a novelette after the book that details the time Gabriel spent caring for victims of an epidemic during his last year in school. The doctors go through burnout, there aren't enough beds or medications for everyone, and certain patients are immediately given palliative care because they aren't considered worthy of saving. Yes, it's very reminiscent to the pandemic we just went through, but the illness and the devastation it caused parts of the world were already present in the book before COVID-19 came about. Even so, it might be hard to read for some people.

I definitely recommend this book and have high expectations for the next one!