Interview with F.I. Goldhaber on What Color is Your Privilege? and the Topics of Their New Collection 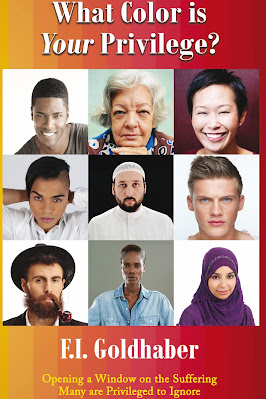 Handy, Uncapped Pen: What was the most difficult thing about writing this book?

F.I. Goldhaber: I didn't "write" this book. I compiled poems that were written over a period of eight years. That said, the most difficult part of putting it together was figuring out the best order for the poems and that kept changing as I added more poems.

HUP: How long did What Color is Your Privilege? take to write/organize?

Goldhaber: I first started putting the collection together (and came up with the title) five years ago. At that time it included 20 poems. In a year it had almost doubled in size and I began sending it out to publishers for consideration.

About a year after that, John Warner Smith, who would be named Louisiana State Poet Laureate two years later, hit up the email list of contributors to Black Lives Have Always Mattered, A Collection of Essays, Poems, and Personal Narratives Edited by Abiodun Oyewole published by 2Leaf Press (in which he and I both had poems). He sought blurbs for his fifth collection—which eventually became Our Shut Eyes, devoted to racial history and contemporary issues of race in American society—with an offer to reciprocate.

Of Our Shut Eyes I wrote, quoting one of his poems, that Warner "plays the 'old familiar song, an American song of race, hate, and rage' for new audiences."

Warner described What Color is Your Privilege? as "a book-length blues song decrying racial, gender, religious, and sexual intolerance in America."

While I submitted the book, it continued to grow. Each publisher got a slightly different compilation as I added new poems I'd written and sometimes new versions of previously unpublished poems (I don't consider a poem to be in its "final form" until it's published). I even added poems after Left Fork accepted it for publication a year ago, the last two inserted in May of this year, for a final total of 72 poems.

"But, does anyone hear my words? Do
they heed my warnings? They sit and nod,
sometimes buy my books."
-from "Poetry "
HUP: Writers who are activists can often feel like their words are useless when it comes to inspiring change. What would you say to those writers?
Goldhaber: That poem actually started out as my introduction when I read poetry at live events and gradually morphed into the introduction to What Color is Your Privilege?
To answer your question, I would say keep writing. Keep submitting. If you only reach one person, if your words influence only one reader to change how they think/approach the world, consider that a success. (And you never know which poem will touch which reader when.) You never know when (and may never learn about) one person will make a difference, however small, that will impact another (or many others) in positive ways.
What Color is Your Privilege? received 22 explicit rejections and 12 implicit ones before it found its perfect home (i.e. someone who loved the book and was excited to publish it) at a press I'd only known about as the indicia on books by colleagues. (I never saw Left Fork on a list of publishers seeking submissions, it has a very narrow focus, but turned out to be a splendid fit.)
Although every one of the 72 poems had been submitted for consideration to at least one publication, only 56 were published previously and almost all received at least one rejection.
Perseverance is key in publishing and protests.
HUP: You talk about passing as white in "Little Old White Lady". How has passing influenced your activism?

Goldhaber: Passing allows me to observe the behavior of those for whom I intended this book—privileged, liberal, white, abled, cis people—when they're not performing (and I mean that in the literal sense) as allies and to better understand how liberals contribute to the problems of systemic racism, ableism (always a tool of white supremacy), and other forms of oppression. (Liberals are today's white moderates about whom Martin Luther King Jr. warned us in his Letter from Birmingham Jail: "more devoted to 'order' than to justice".)

It also gives me the privilege of using that assumption of whiteness to advocate for, and when appropriate, interfere on the behalf of those who are not as I did in the incident related in that poem.