The Beautiful Man: a Portrait by Su Zi 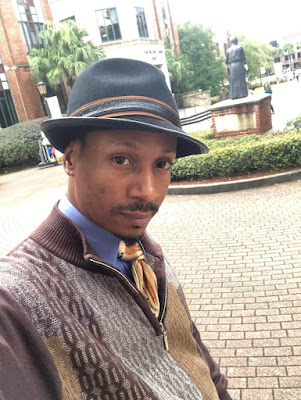 A person approaches a public restroom: on the door is a stick figure of a person and a wheelchair—for many people, this is what disability looks like: the wheelchair. There are invisible disabilities, as not all disabilities are immediately perceivable by strangers. Additionally, disabled people learn to hide their vulnerabilities, their differences, their difficulties in an exhausting camouflage known as masking. Ours is a culture that stigmatizes disability.

In the realm of culture and identity, communities of people can create bonds with others who identify as they do; however, sometimes those very cultures will exclude or silence the disabled among them. In an interview with Gavin Christian Brown (August 2022), he readily identified as a teacher, as an actor (film, TV, and theater), as a writer, and as a Black man. Gavin also has health issues, “It’s ridiculously hard to put on my shoes sometimes…hard to shower…to pick things up”. Yet, because he was denied disability by the government, Gavin did not immediately identify as disabled; this conundrum faces many disabled people where states habitually deny aid to half the applicants. Of this situation, Gavin says,” I know I am disabled. I know what my health is like. I know what my abilities are. We have to adjust to do the best we can, despite limitations imposed on us.” In his case, those limitations include “numerous interconnected health issues” that date back decades, and include permanent damage from physical abuse in gym class at age eleven, and for which he recently had surgery.

Gavin is a teacher, and he says that he practices “selflessness as a teacher”. He is also a public persona, appearing in supporting roles on NCIS and in films, as well as being present online. He says he tries to “inspire a lot of people who think they might give up by trying to be positive”. To this end, he posted a picture of his surgical scar, and followers will often find pictures of Gavin next to stars such as LaVar Burton (“meeting him on NCIS was a big highlight of my life. He is the nicest person. At one point, he stopped production to read to the kids and disabled folk at the center where we were filming. I grew up on Reading Rainbow, so I was a bit star struck”). He believes that we can “inspire each other to do better” and often posts philosophical musings for that purpose.

Although Gavin grew up with “multiple head injuries from abuse”, and “collapsed playing Basketball…November 1994” because of an enlarged heart, the medical care was seen as primitive, and his parents “vetoed” medical treatment because of “skepticism”. In the Black community in which he was raised:

Black disability is a closed, restricted space. For some people, disability doesn’t exist, it’s the realm of religion and prayer. There’s no discussion of going for help with mental health, going to the doctor.
There’s a target on your back.
You have to be tough, and you cannot express yourself, or express your pain. It’s seen as weak.
You cannot ask for help. Support networks are kept to intimate circles, plus there’s the feeling of being conditioned to not need them.
And thus, regarding his identity as a disabled person, “it’s such a rare thing for us to be open about this”

For those who only know Gavin as a writer, it is fair—if an identity must be restricted—to see him for this alone: “Writing keeps me alive…it’s wonderful and beautiful…it’s a joy…I love it so much. It’s a tragedy turned into a triumph”. To his credit, Gavin has written a series of books that he says he is happy “if one person reads” and which are available through Amazon.

And while he repeatedly maintains that “men are socialized to ignore pain”, his post of his surgical scar had some “upsetting and racist” responses, creating yet another situation that he finds “very complex and very difficult”. Yet it is our culture which is shallow and restrictive: a government that deliberately undercounts and underserves a vulnerable but significant population; a section of our own citizenry so marginalized as to disavow the vulnerabilities in the community, to veil people in silence; a teacher financially beleaguered enough to work another job; an artist who must fight publicly unacknowledged restrictions and personal physical pain to release work that is sometimes unnoticed. This is far more than the depiction of a stick figure wheelchair would have the mostly oblivious believe. Yes, disabled people are more than the disability seen from afar. In the case of Gavin Brown, yes, he is disabled, and more importantly, yes, he is a truly beautiful man.