The Blind and Art by Carol Farnsworth

I have enjoyed seeing art exhibits. As my sight has decreased, I have learned to rely on verbal and braille descriptions of the displays. I still long to touch the art with my fingertips.

I was able to do this in Death Valley at a place named ”Scottie’s Castle”. It was a large home built in the early 1900’s. It contains many decorative carvings in the woodwork and brass knobs. The carvings are in the shape of the animals and cacti found in the area.The docent was delighted to have a visually-impaired person in his group. He put on a glove and guided my fingers to touch all the carvings and the brass bird heads that were the faucets. He told the rest of the group that they could not touch anything. He and I explored all the surfaces. I was embarrassed and delighted to get a tactile and audio tour.
~My husband and I are members of a sculpture park, and I take delight in touching the art in a garden setting. The docents watch but don’t stop me from lightly touching the art. I have even sat on one art bench to get the dimensions of the piece. The docents are there to prevent small children from climbing. They understand this touching is how I experience the art.
~My local city sponsors a large art show each fall. I was worried if I would have to be content with descriptions of the art pieces. When we got to the outside pieces, I was able to touch parts of the large ones. Some pieces had signs inviting the public to touch.

If the artist was near his or her piece of art and they listened to the art being described to me, they would ask if I would like to touch the piece. They would point out parts of the art they were most proud of.

One woman, after finding out that I was a knitter, placed my fingertips on a carving of a men’s sweater and asked if I could feel the dropped stitch in the pattern of the sweater. I told her I could.

If the art was not able to be touched, the artist put a display of the art pieces for people to feel. This was done in a piece that was covered with three-dimensional flowers. She had several flowers in front of the picture to touch.

Another artist allowed me to feel the muscles in a group of running horses.
~
I have not found a way to tactilely enjoy paintings. I know that the art may be hurt with touch. I did find a group of paintings that had sand and other mediums mixed in with the paint. The art was tactile and I could discern parts of the art by touch.

Including the blind when setting up an art exhibit takes some time, but it is well worth the effort.
I continue to support the arts and making them accessible to all.
~*~ 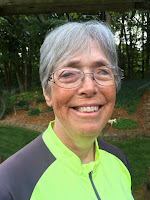 Biography (in first person):  I was born with glaucoma but have become totally blind in the last four years. I have a teaching degree in regular and special education and a Master’s degree in Speech Pathology. I worked with mentally disabled adults (many were nonverbal). I learned to use many techniques to elicit communication.Similarly, I will use many tools to deal with blindness. I will use braille, voice over, and Seri to assist me with writing.Other interests include gardening, listening to audio books, and riding a tandem bike, which my husband John and I have been doing for 22 years.
Posted by J. R. Jackson at 1:00 AM